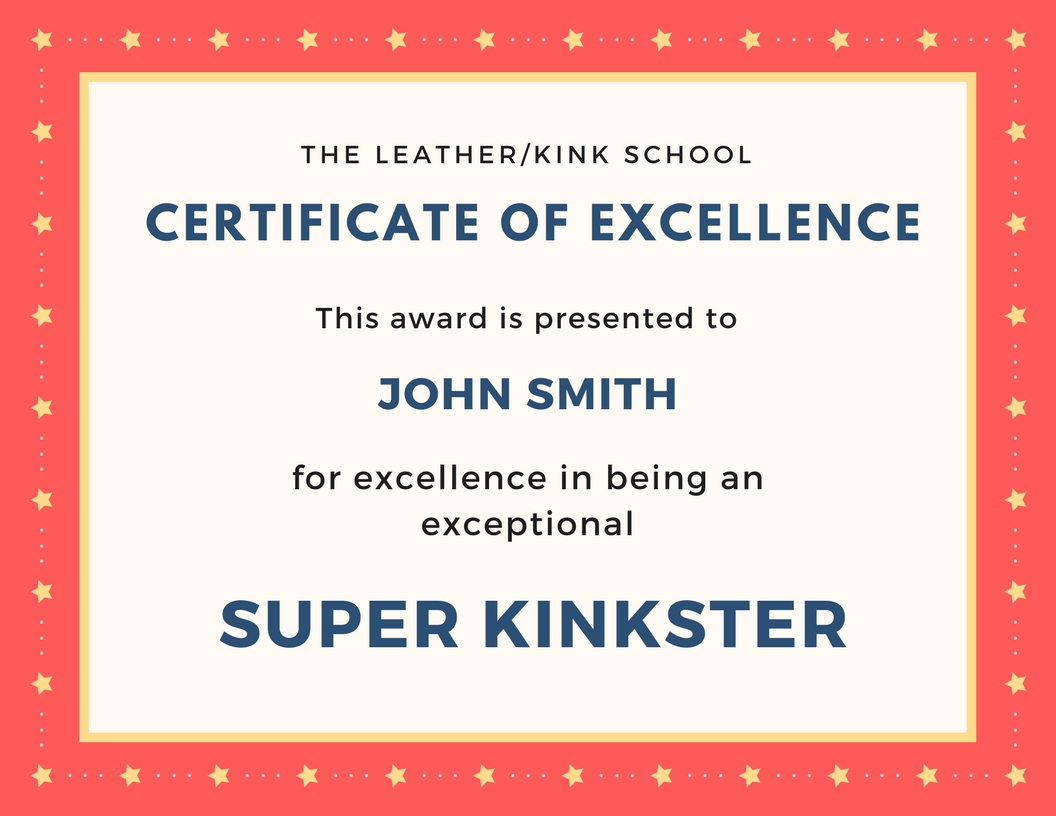 “No, you’re not that special.”

As I was reading an interesting book, The Subtle Art of Not Giving a F*ck: A Counterintuitive Approach to Living a Good Life, by Mark Manson, a chapter section titled “The Tyranny of Exceptionalism” struck me as pertinent to modern day kink. (Note: I liked the book. I suggest you buy and read it.)

In that section, Manson contends, and rightly so I think, that most of us are rather average at most things we do. Perhaps we are exceptional at one thing, but the chances are that we’re average or even below average when it comes to so many other aspects of life.

Considering that most of us are not exceptional at most things, while at the same time we are all deluged with external messaging that we should always be exceptional through the skewed media portrayals of so many people being exceptional, it’s no wonder that most of us fall into despair and depression due to our lack of exceptionalness.

Society in general is inundated with a flood of information and news that conditions us to believe that exceptionalism is now not only the gold standard, but the actual norm. It’s not, and never will be. Still, these messages we receive are strong and compelling.

Manson points out that these pervasive messages received through consumer marketing, social media and other sources resets people’s expectations for themselves at ridiculous and unattainable levels. People end up feeling crappy about themselves.

I believe this social malady of exceptionalism impacts the leather and kink worlds too.

We are fed by a subset of social media and other leather and kink megaphone platforms that we must be exceptional, not average, kinksters. We’re outright told or subtly coerced into believing we should be people who know everything about everything in our kink realm.

Titleholders should be the perfection of supposed representation.

People should be mind readers and never fuck up around consent or other important issues.

You must know all our leather history and be able to parrot it at will, even if you really don’t fully understand that history. Even worse, in some camps you’re told to adhere to some mythological Old Guard (sheesh, I had to use that damn phrase again, see my The Truth About Old Guard for more about this) set of values and ways of functioning, essentially building your kink life on falsified quicksand.

Your formal kink education must be ongoing and robust. It’s the kink equivalent to always being in college, but you never quite get the degree.

The areas in which kinksters receive messaging that they must be exceptional are numerous and impossible for anyone to match. Especially if they happen to be your everyday kinkster who doesn’t live 24/7 mired in the leather and kink hot issues and topics of the day.

Is it any wonder some ponder entering the more organized side of the kink scene and then slowly back away thinking to themselves “damn, I can’t achieve all of that so I guess that’s not for me”?

They then do one of two things.

They might end up eschewing the organized scene and become one of the multitudes of rogue independents who simply socialize and play with other leatherolk and kinksters as they wish, when they wish. This is the best of the two outcomes with the hope that these independents at least glean a bit of basic safety and ways of optimally functioning from others in their sphere. Truth is, this is how it was generally done for a long time before the organized scene blew up into the mega-scene it is today.

Or, they might end up assuming the expectation of kink exceptionalism is the adopted norm and not the relative rarity that it is and think to themselves “I guess I don’t fit in anywhere here and I’ll have to abandon my dreams of exploring kink.” This is of course the worst of the two possible outcomes. In our scene’s drive toward making everyone exceptional we might indeed be pushing out some wonderful people who simply want to explore some kink, but not spend the countless hours it takes keeping up with the kinky Joneses.

We need to lighten up and pull back some bloated expectations.

Fostering exceptionalism is a trap. It’s a burden. It doesn’t help us. It hurts us. The truth is most leatherfolk and kinksters, and indeed anyone who walks within the sexually adventurous camps, are quite average, and average is good. Average is fine. Average is where most want to exist.

Most people’s bondage isn’t perfect, but it holds people in place and they have fun.

Most power dynamic scenes or relationships are highly imperfect and the truth is most Dom/sub relationships stumble and re-create themselves all the time.

Most titleholders are just average people who happened to win on a certain day. We must stop expecting them to be much more than that. If they elevate to something more exceptional, awesome. But at the end of the day they’re mostly nice people who won a contest. Let’s stop trying to make them something else, for their own sake as much as ours.

Most community leaders are simply people who found a niche and a path to doing something useful in the scene. They’re rarely perfect. They screw up. Hopefully they correct their course if they do. I find they usually do. But it’s astounding how often one high-profile fuck up will send someone’s reputation into the toilet. We rarely give people adequate breathing room to improve.

I don’t want to beat this topic up much more here. Suffice it to say that I hope we in what I refer to as the inner sanctum of the scene (those who are the most vocal and deeply entrenched in the running of and commenting on the organized leather and kink communities), lighten up some.

Let’s stop assuming most kinksters are or want to be part of the highly organized scene itself.

And if you meet someone who seems put off by our scene’s rampant exceptionalism, please talk with them and let them know that no, most of us are quite average. They can simply socialize with us and play with us and have fun with us and not try to be Super Kinkster. Superheroes are a fiction for a reason.

Yes! Also, masochism isn’t a competition and you’re not an inferior bottom if you don’t have the most and biggest marks, scars or bruises.

Great post, Race. I’d say it is exceptional, but that risks uteerly missing the point!

There was a nifty piece in Huffington Post about bringing leather/kink into the mainstream. A photographer at Folsom took a bunch of pics of folks in their kinky outfits, and then he asked them to come back a day or so later wearing what they normally wear–to work or wherever. Then he published the pairs of pics. As I say, this is a nifty piece; hope it’s still there to be found.

I believe Sashings are much worse than you describe in this article. They are a destructive force in our community and should be DISCOURAGED.